There is many different possible settings to adjust the quality of a mesh in Inventor NASTRAN. In this post, I will present one of the most useful: Suppress Short Features.

You will need to adjust this parameter when a CAD part presents some narrow angle or small feature, like this one:

The problem is that by default, the mesher tries to stick to the topology of the CAD. By meshing this narrow angle, some elements will therefore have a bad aspect ratio. The “Suppress Short Feature/Min Feature Angle” settings control how much the nodes can deviate from the CAD.

Contact us to learn more about our engineering services and training related to Inventor NASTRAN.

Why should a beam structure be meshed with structural elements?

We are talking about this kind of structure: 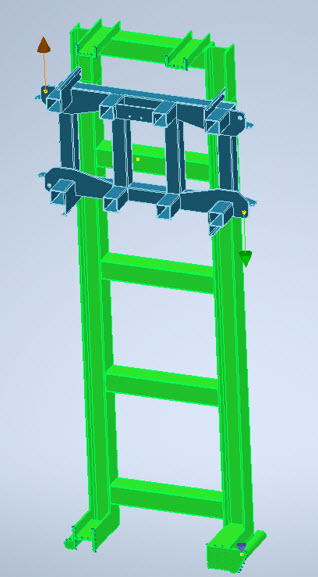 You have a solid CAD file of this structure. What do you do: use beam elements, extract mid-surfaces to mesh it with shell elements, or directly mesh the solid 3D CAD file with tetras (the “quick and dirty” approach)? Does the tetra mesh will be able to catch bending of the beams? There is only one way to answer this: try it with different mesh sizes. The study I did for this particular model (linear elastic analysis) told me that using 2 quadratic elements in the thickness results in an error of 5% on the displacement and 4% on the stress (compared to the same structure meshed with shells). 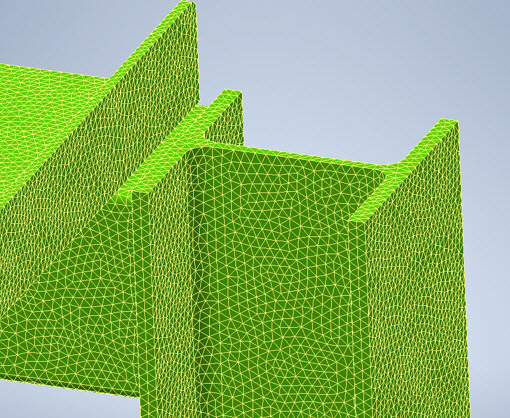 If the shell approach is chosen, Inventor NASTRAN has a very good tool to extract the mid-surfaces:

29 January 2021 Comments Off on Why should a beam structure be meshed with structural elements? Inventor Nastran

Like many other FEA engineers, I have a library full of books describing the theory and basis of FEA. Some are great classics: Bath, Hughes, etc. I am happy to have spent hours with them in my graduated studies, but I mainly use them now to adjust the height of my screen. That said – don’t get me wrong – I really do believe that they made me a better FEA engineer. 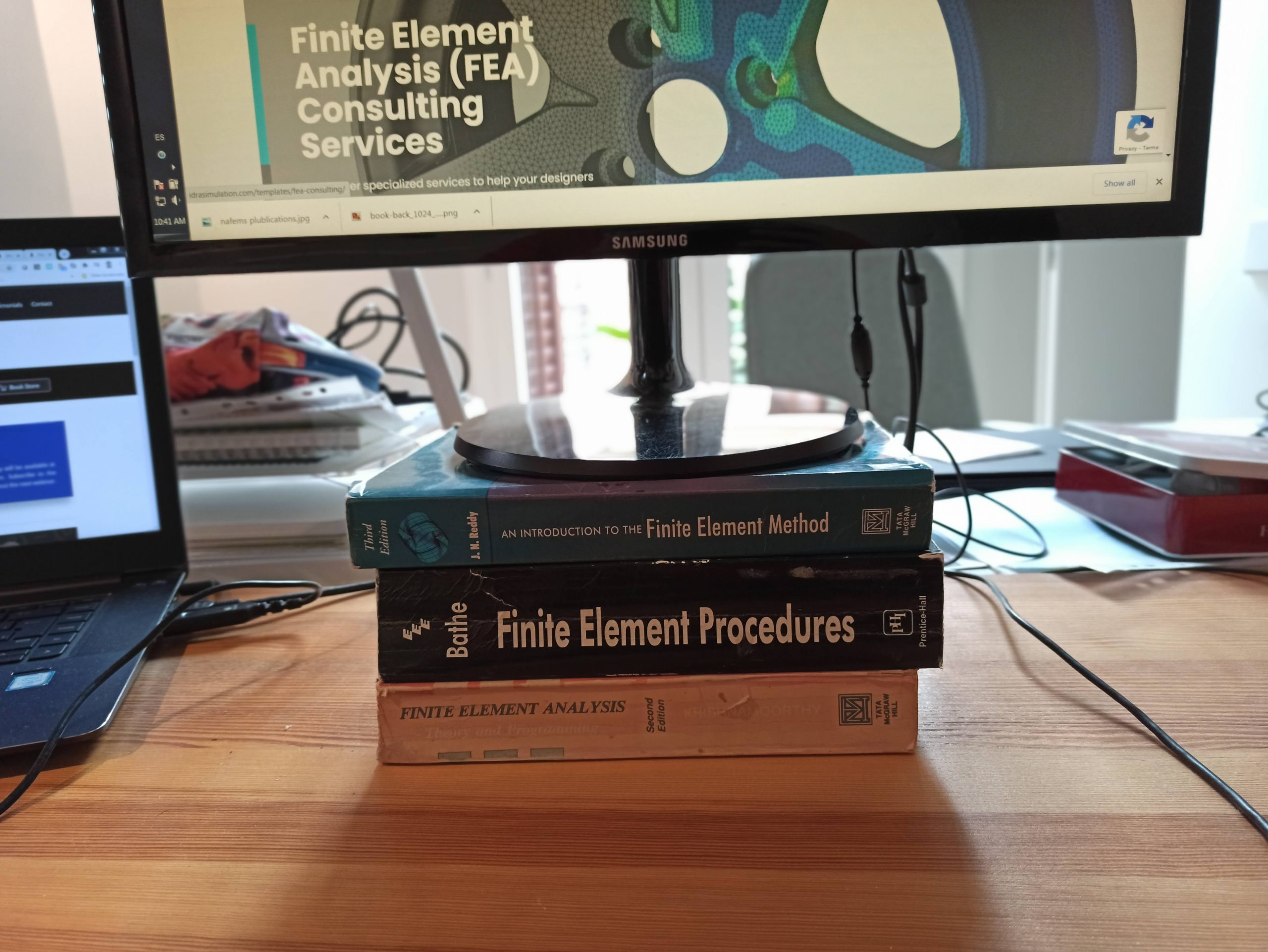 In my search for a good applied FEA book over the years, I found Mac Donald’s “Practical Stress Analysis with Finite Elements“. A very good one that I recommend, but not as complete as this new publication by experienced FEA engineer Dominique Madier: “Practical Finite Element Analysis for Mechanical Engineers“. This book totally fills the missing link between theory books and FEA software. Madier explains it himself in this webinar: “How to Learn FEA”. I could not agree more with him… 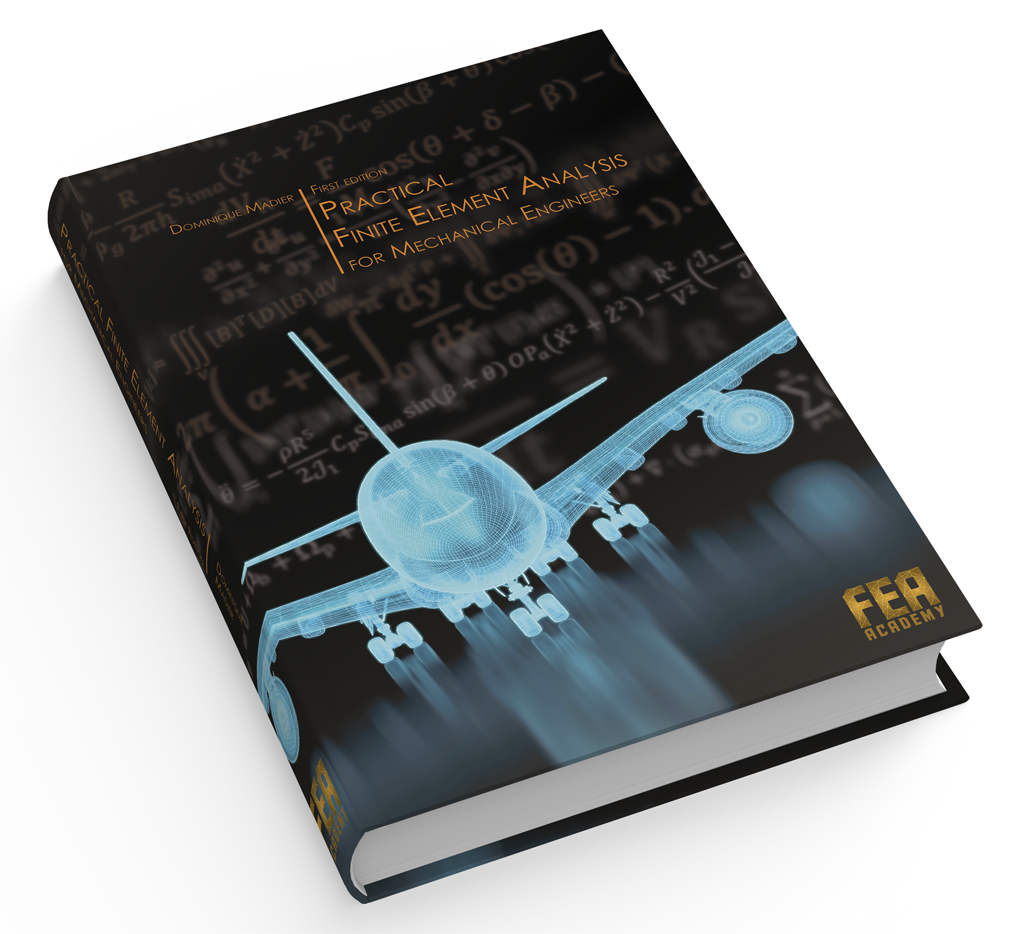 By the way: another good source of practical FEA literature: NAFEMS Publications!

11 December 2020 Comments Off on About FEA Books News

A new revision of Midas NFX is available for download at this address. Version 2020-R2 has a series of improvements and new functions. Among them, a new option that includes a user-defined function for external forces of particle analysis. See a complete list of change in the Release Notes. 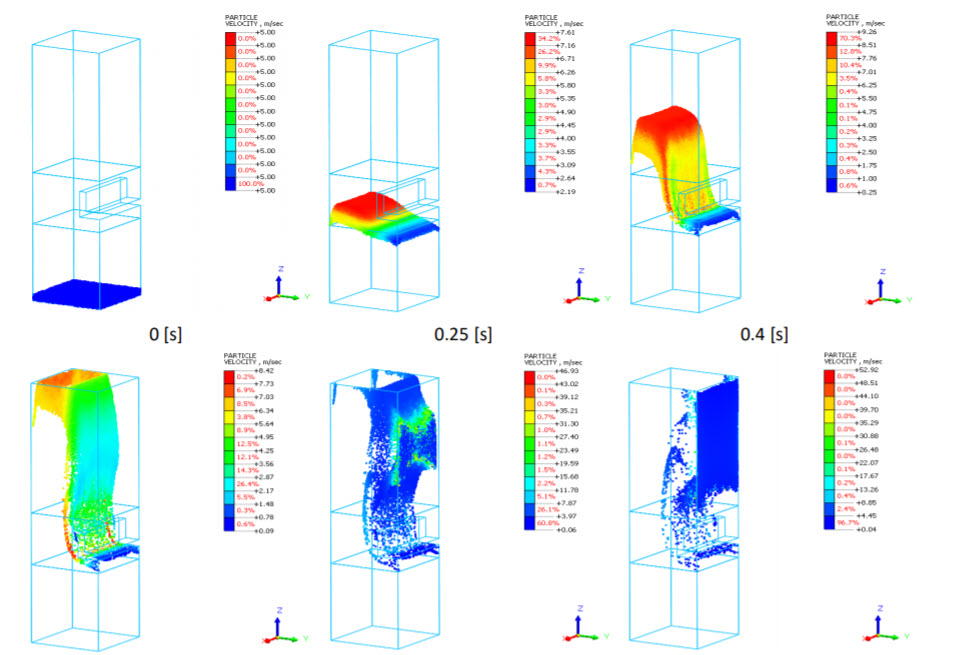 Prestressing technique is used to decrease the tensile stresses that develop in a metal forming die (powder compaction, extrusion, stamping, etc.). In order to increase die life and to protect the shrink ring, the interference value between the two parts must be optimized.

The iterative variation of the design parameters (interference, diameters, material properties) using numerical simulation leads to a reduction of time and resources invested. This process can be automated in order to obtain an optimal design.

The maximum principal stress for interference values of 0.05, 0.1 and 0.15 mm are shown on this image (section in the middle of the compacted part):

This animation shows a proof of concept geometry that we realized for an electrical water heater.

Two graphite electrodes are immersed in a water tank. Three physics are involved. First, the static current conduction equation is resolved. Then, Joule heating energy is calculated in the entire geometry and used as a body force for the heat equation. Finally, temperature calculated is introduced in the Navier-Stokes equations

Topology optimization determines the distribution of material most suitable to a given objective. It is primarily used to produce a fundamental basis for the engineers at the conceptual design stage, or to generate ideas for new alternatives.

In order to express the distribution of materials in topology optimization, density variables of the finite elements created for analysis are used. The element density of 1 represents a part that requires the element, while 0 represents a part that does not require the element. Unlike parametric optimization, the only design variable is the element’s density. As such, the user does not specify separate design variables but composes an optimization problem using only the combinations of objective functions and constraints.

Objective: In this problem, the objective is to minimized the static compliance (a function of element density expressed in the form of global deformation energy):

Design variables: Volume fraction (the n_nodes density values which determine whether material is present (1) or absent (0))

Design evaluator: the linear elasticity solver of MidasNFX, that calculates deformation energy based on specified loads and boundary conditions.

Since we are looking for general guidelines of an optimal design (in practice, we should say “better design”), the next step consists of modifying the original CAD geometry to remove material when it’s not needed:

Topology optimization often leads to complicated organic-like products that cannot be manufactured using traditional processes (which is not necessarily the case here). Additive manufacturing, like 3D printing, is sometimes more adapted for this kind of design. Here, a printed version of the optimized part is produced.

This video summarizes the whole process:

Midas is inviting you to a webinar about Random Analysis. A good opportunity to learn more about: